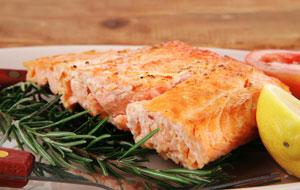 And there’s no better choice for omega-3 fatty acids than salmon. Baked, broiled, grilled or seared, salmon makes for a succulent supper. Here is an easy salmon recipe perfect for heart health:

Roasted Salmon with Olives and Tomatoes

Preparation
Preheat oven to 400 degrees F.
Place tomatoes, onion, garlic and orange zest in a large roasting pan; drizzle with olive oil, then toss to coat.
Roast, uncovered, for about 45 minutes, or until tomatoes and onion are tender and beginning to brown on the edges.
Remove pan from oven. Increase oven temperature to 450 degrees F.
Add olives and rosemary to pan; season with salt and black pepper.
Make four spaces in the pan for each salmon piece. Spoon some of the tomato mixture atop salmon.
Roast for 10 to 15 minutes, until salmon is opaque in the center.

May is the gateway to summer--it is a month that can start off raining, but always seems to end with sunshine. The days are continuing to get warmer and longer, and we are enjoying a wider selection of fresh produce. May is also National Barbeque Month, so if you have not already been outside grilling, there is no excuse to delay any longer. This is a test.